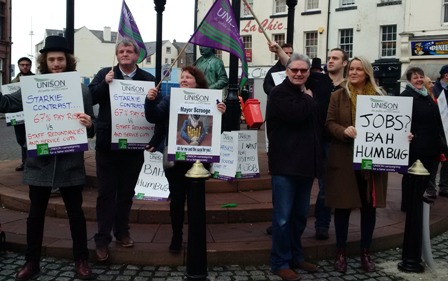 Copeland Council staff who work in services including Benefits, Revenues and Customer Services will be taking strike action next Thursday, 22 December.

The half-day strike is a last resort for staff who have made repeated efforts to point out the flaws in Mayor Starkie’s plans for cutting services.

“All councils face funding pressures, but what’s different in Copeland is that we have a Mayor who refuses to listen to the concerns of staff.

“Council staff are worried that the cuts being forced through by the Mayor will lead to delays in people receiving benefits – which could cause real hardship.  The cuts will make it harder for residents to contact their Council and access services, and the cuts in Revenues are a false economy that could jeopardise the ability of the Council to fund services in future.

“Mike Starkie is still quite new to the mayoral role and he has talked modestly in the past about being on a steep learning curve.  He needs to put that modesty into practice now and listen to what council staff have to say about the damaging effects of his plans.  He needs to pause before ploughing-ahead with making staff redundant who have irreplaceable experience and knowledge.

“Unlike Mayor Starkie – the Council’s staff have chosen to give their working lives to serving the people of Copeland – in jobs that aren’t especially lucrative.   They have seen their real pay fall in recent years, while Mayor Starkie got a 67% pay rise in 2016.  They now face the prospect of being out-of-work in the New Year.

“It’s not too late for the Mayor to stop the strike action.  He should listen to what the staff are saying and stop the compulsory redundancies.  Scrooge saw the error of his ways at Christmas time – we hope that the Mayor will do so too.”