Council Staff Set to Strike as Services Struggle to Cope 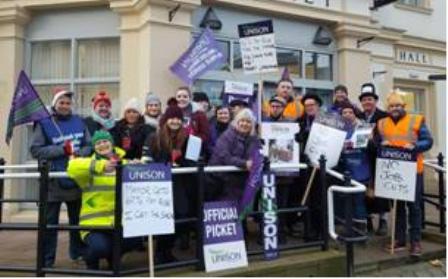 Copeland Council staff who work in services including Benefits, Revenues and Customer Services will be taking strike action on Thursday 16 February to highlight the growing pressure on services caused by Mayor Starkie’s cuts.

Many staff have already been made redundant over the past two months, and as a result there is a mounting backlog of work.  This is causing stress for remaining staff, delays for benefit claimants, and is storing up future problems for the Council.

UNISON is calling for the Mayor and the Council to take urgent action to restore the level of staffing across Support Services, with a particular focus on Revenues and Benefits.

“Mayor Starkie’s dogged pursuit of financial savings has led to cuts that are starting to bite – and it is the public, service users and staff who are suffering as a result.

“For people going through a difficult time, delays in receiving benefits can cause real hardship.  The cuts will make it harder for everybody to contact their Council to access services, and the cuts in Revenues are a false economy that could jeopardise the ability of the Council to fund services in future.

“Council staff have chosen to give their working lives to serving the people of Copeland and Mayor Starkie should listen to them.  Staff are upset about the falling quality of local services and the growing backlog of work they face.  Mayor Starkie is not employing enough staff to do the job and there is an urgent need for more resources to be invested. UNISON have suggested alternative budget proposals as well as requesting the intervention of ACAS to resolve this dispute but our proposed solutions have been rejected by the Council.

“While Council staff have seen their real wages fall in recent years, Mayor Starkie has enjoyed a career in financial advice and has had a 67% pay rise since he became Mayor.  Instead of ploughing-ahead with his own pet project, the Mayor should listen to the true public servants.”