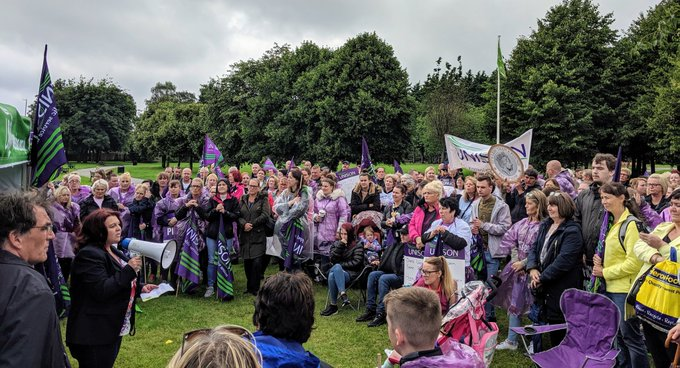 Why did we strike?

We are hospital support staff working for Compass in St Helens & Knowsley and Blackpool NHS Trusts. We keep hospitals clean, cook for patients and keep them safe.

We were paid over £1000 less per year and had worse terms & conditions than some of our colleagues who do exactly the same jobs. That's why we stood together for fair pay and fair treatment.

Our fellow UNISON members at Liverpool Heart and Chest Hospital won their dispute against Compass on the eve of their first strike action but we had to fight a 5 month dispute for fair treatment.

We called on Compass to end the two-tier workforce they've helped to create in St Helens and Blackpool hospitals.

We called on Compass to pay the full NHS Agenda for Change (AFC) hourly rate of £9.03 to all staff.

We called on Compass to commit to full NHS AFC terms and conditions for all staff, including enhancements and occupational sick pay.

What action did we take?

We went on a one day strike on Wednesday 31 July, followed by two days of strike action on Tuesday 27 and Wednesday 28 August, next we took three days of strike action beginning on Thursday 19 September. Then we took six days of action, which began on Monday 14 October. Finally, we went on strike for two days beginning on Monday 25 November. We went on strike five times for a total of 14 days.

We met with local MPs, Mayors and councillors and we even traveled all the way to Compass' HQ in Surrey to make sure they listened to us.

What was the outcome?

We won! We voted to accept deals which secured significant hourly pay rises to at or above the NHS pay rate of £9.03, more money for working weekends and bank holidays and an improved sick pay scheme.