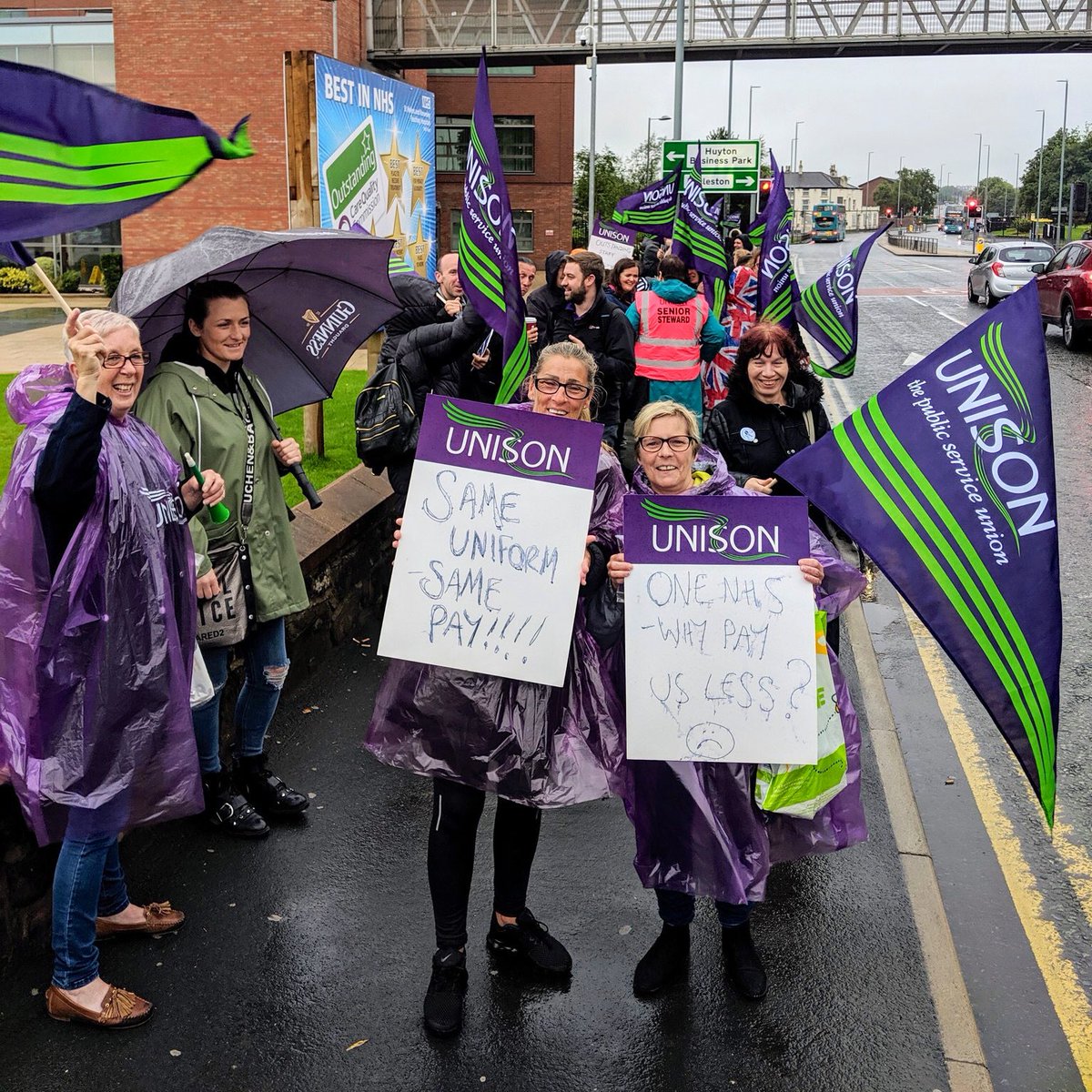 Most of the 300 hospital workers affected are paid only the minimum wage rate of £8.21 an hour, and yet work alongside colleagues who are employed directly by the NHS, where the lowest rate is £9.03 an hour. This difference of 82p an hour is worth £1,600 a year for full-time staff, the union says.

On top of the lower hourly rate of pay, Compass staff are also disadvantaged by receiving no shift bonuses for working weekends and bank holidays. In addition, they receive only statutory sick pay, whereas their NHS colleagues are able to access a comprehensive sick pay scheme.

Since the hospital staff announced their plans to strike, Compass met with UNISON to seek to find a resolution to the dispute. The company did make an offer in order to try to prevent today’s strike but it was unanimously rejected by the Whiston and St Helens Hospital workers at meetings which took place over the weekend. The company made no offer to hospital workers in Blackpool.

A further planned strike at Liverpool Heart and Chest Hospital NHS Foundation Trust was called off yesterday evening after the trust – rather than the company – agreed to fund the pay parity with NHS colleagues.

UNISON North West regional organiser Maria Moss said of the Liverpool deal: “This agreement is excellent news for Compass staff at Liverpool Heart and Chest. They make a huge contribution to the health service and they will now receive the NHS rate for the job.

“Their determination and unity has delivered results. We now hope their colleagues in St Helens and Blackpool are fairly treated by Compass.”

Commenting on the strike, Jean Johnson, a catering assistant employed by Compass at Whiston Hospital said: “I work together with colleagues who do exactly the same job, we all work incredibly hard preparing food for patients and yet some are paid a lot more than me. It’s just not right.

“It’s especially bad at the weekends as some colleagues are getting enhancements for working unsociable hours. I’d happily do more overtime but it just seems completely unfair to go in and earn so much less than others.

“I don’t go off sick lightly, but I had an operation and couldn’t go into work for three months. I struggled to pay my bills because I wasn’t receiving full sick pay.”

Denise Williams is branch chair of St Helens and Knowsley Health UNISON. She said: “I am right behind my colleagues who have been forced into taking the difficult decision to strike today.

“Our cleaners, caterers, porters, reception and security staff make a huge contribution to the NHS and played a big part in helping the trust secure its recent outstanding CQC report.

“This contribution needs to be recognised – it’s completely wrong that some of my colleagues are treated as second-class employees and the time has come for Compass to put an end to this two-tier workforce.”

“UNISON members met to discuss the offer, unanimously deciding to reject the offer and press on with strike action. These brave hospital workers are completely united and will stick together until they receive fair treatment from Compass.

“It’s simply wrong that two people doing the same job within our hospitals are being paid completely different rates- this can’t be allowed to continue any longer.

“Compass made £1.7bn in profit last year alone, we refuse to accept that they can’t afford an 82p pay rise for the lowest paid staff in the NHS.

“We hope that Compass will work with us to solve this issue, but if a reasonable offer is not forthcoming then they can expect further strikes in the near future.”