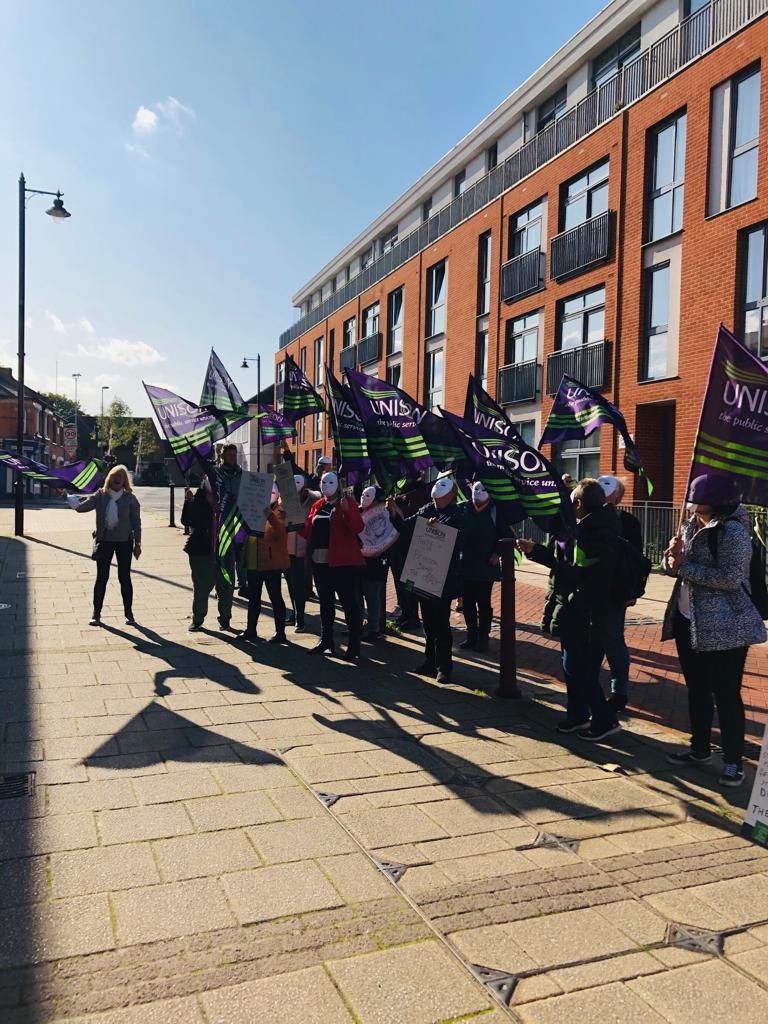 A coachload of striking Compass workers headed 200 miles south yesterday (Tuesday) to the company’s Chertsey headquarters to urge their employer to pay them the same as their NHS colleagues.

The staff – who work for the contractor at NHS trusts in St Helens and Blackpool – were taking the penultimate day of their latest 6 day strike action. They’re hoping the doorstep protest will persuade company bosses to end the dispute, which began this summer.

The hospital cleaners, caterers, porters, receptionists and security workers have been striking on alternate days since last Monday (14 October) over the company’s failure to match health service pay rates and working conditions.

Most of the Compass employees are on the minimum wage (£8.21 an hour), yet work alongside colleagues employed directly by the NHS, where the lowest hourly rate is £9.03.

This difference of 82p an hour is worth around £1,500 a year for full-time staff.

As well as earning less, Compass staff don’t receive bonuses for working weekends or bank holidays, and only get statutory sick pay – unlike their directly employed colleagues.

After their trip to Compass HQ, the strikers headed on to the UNISON Centre and met with senior union officials including UNISON general secretary Dave Prentis, who said: “All these hospital staff are after is fairness. They give their all day in and day out, which is hard to do when they’re working alongside colleagues being paid significantly more.

“Compass could easily afford to pay its staff a better wage – it made more than £1.5bn of profit last year. Yet it’s ignored staff, has given conciliation service ACAS the runaround and refused to get around the table to bring this dispute to an end.

“Hopefully the trip to Chertsey will persuade Compass to see the error of its ways, and start paying staff the NHS rate they well and truly deserve.”

“These dedicated hospital workers have been forced to take four rounds of strike action, that’s 12 days in total. This is not a decision any take lightly.

“Compass bosses say they don’t know what the strikers want but they’ve clearly not been listening. That’s why we’ve come down to head office.

“The striking staff want a pay rise to bring them in line with NHS colleagues, plus occupational sick pay and unsociable hours payments. That’s surely not too much to ask of a company that pays its CEO more in a day than a hospital cleaner makes in a year.”

A striking Compass worker said: “I do the same job as colleagues who are paid more than me. We wear the same uniforms, are subject to the same rules, have the same job descriptions – yet we’re paid and treated differently. It’s simply wrong.

“At weekends and on bank holidays, my colleagues on NHS contracts can be paid more than double. What’s more, if we’re ill, we have to choose between going without wages or working while we’re sick. A colleague arranged chemotherapy around their shifts because they couldn’t afford to be off work. Compass can end this cruelty – I hope they listen today.”