“Bupa makes huge profits and they can afford to pay their staff more.” 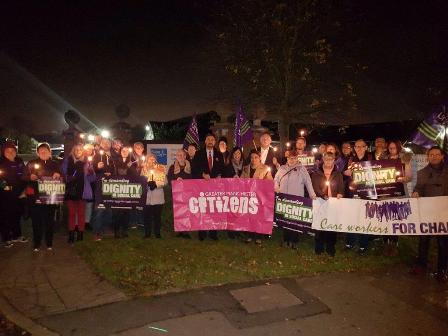 UNISON members and activists joined with residents’ families, community groups, and local politicians at a candlelit vigil last night to call for care home giant Bupa to pay the real living wage to all its staff.

The real living wage is independently-calculated to be the minimum needed to get by.  The new rate is £8.75 per hour, but staff at the Gorton Parks care home receive as little as £7.55 per hour.

Bupa made an underlying profit from its UK operations of £195m in 2016, and the community united last night to call for Bupa to pay staff more.

Paul Williamson has an Auntie at Gorton Parks.  Paul said:

“When I knew my Auntie was going into a Bupa home I was happy because I thought they were a good company.  I thought staff would be paid the living wage. Bupa make so much money but don’t pay their staff properly, it’s a joke. They should put the money back into wages.”

“Social care is a really important public service and people deserve dignity in social care. It is only right that the staff who care for vulnerable people are paid a decent living wage.  Bupa makes huge profits and they can afford to pay their staff more. We all hope that they will commit to paying their staff a real living wage.”

“We have people in our churches who need social care services and people who work in providing those services.  As a society we need to help and support those most vulnerable.  Care staff should be paid at least the real living wage and communities across Greater Manchester appreciate their valuable work.”

A careworker who is employed at Gorton Parks said:

“The wages here are low.  I’ve had problems with debt and I can’t ever afford to go on holiday.  When I do have leave from work I have to pick up extra shifts to top-up my income.  It gets tiring.

“It’s not right that so little money is put into social care and I think we should be paid more for what we do.  That would be good for us, and I think it would be better for residents too.”

UNISON will continue to work with groups like Greater Manchester Citizens to add our voice to the community’s demand for dignity in social care.