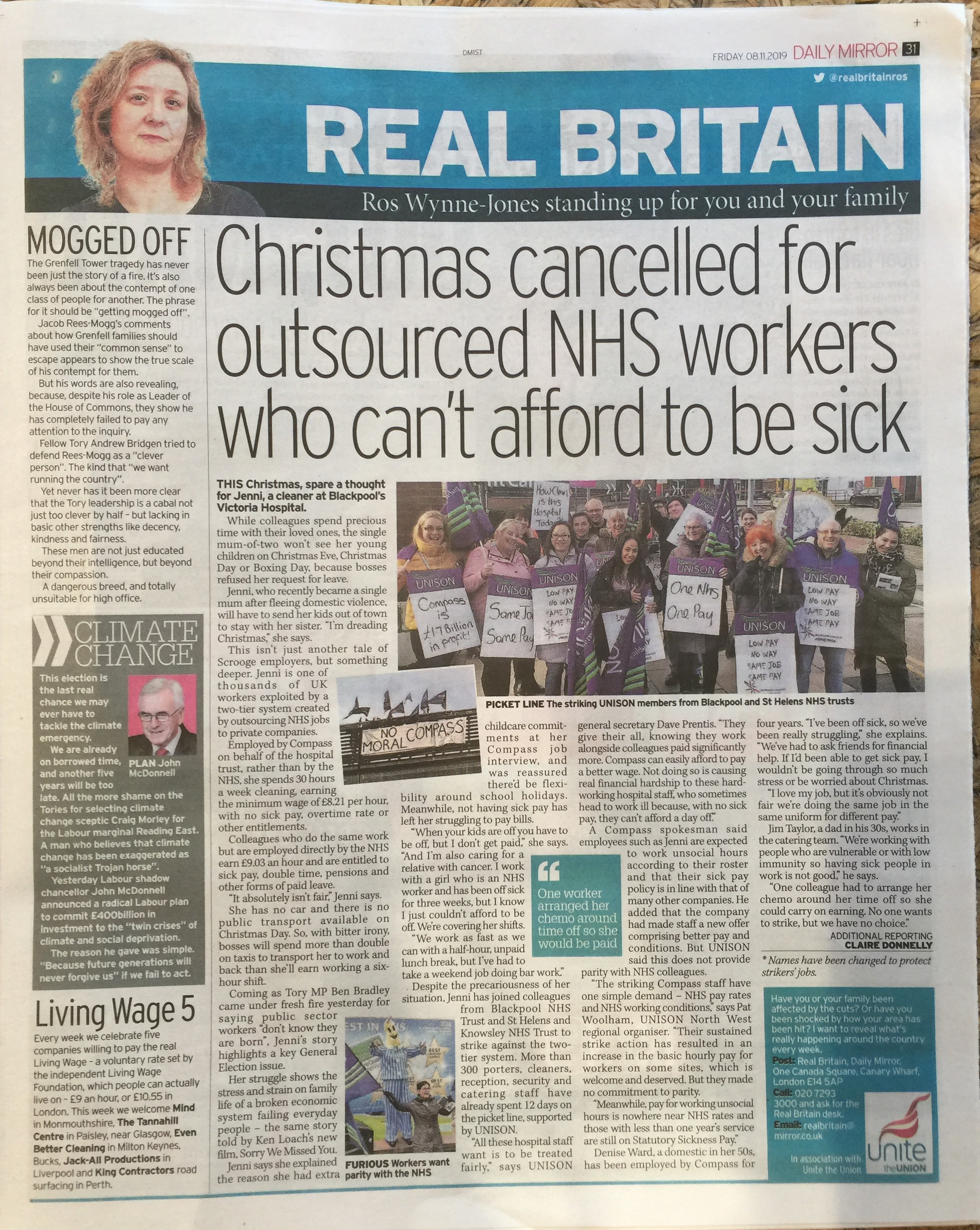 Thousands of UK workers exploited by a two-tier system created by outsourcing NHS jobs will have little time to spend with family this Christmas.

This Christmas , spare a thought for Jenni, a cleaner at Blackpool’s Victoria Hospital.

While colleagues spend precious time with their loved ones, the single mum-of-two won’t see her young ­children on Christmas Eve, Christmas Day or Boxing Day, because bosses refused her request for leave.

Jenni, who recently became a single mum after fleeing domestic violence, will have to send her kids out of town to stay with her sister. “I’m dreading Christmas,” she says.

This isn’t just another tale of Scrooge employers, but something deeper. Jenni is one of thousands of UK workers exploited by a two-tier system created by outsourcing NHS jobs to private companies.

Employed by Compass on behalf of the hospital trust, rather than by the NHS, she spends 30 hours a week cleaning, earning the minimum wage of £8.21 per hour, with no sick pay, ­overtime rate or other entitlements.

Colleagues who do the same work but are employed directly by the NHS earn £9.03 an hour and are entitled to sick pay, double time, pensions and other forms of paid leave.

She has no car and there is no public transport available on Christmas Day. So, with bitter irony, bosses will spend more than double on taxis to transport her to work and back than she’ll earn working a six-hour shift.

Her struggle shows the stress and strain on family life of a broken economic system failing everyday people – the same story told by Ken Loach’s new film, Sorry We Missed You.

Jenni says she explained the reason she had extra childcare commitments at her Compass job interview, and was reassured there’d be flexibility around school holidays. ­Meanwhile, not having sick pay has left her struggling to pay bills.

“When your kids are off you have to be off, but I don’t get paid,” she says. “And I’m also caring for a relative with cancer. I work with a girl who is an NHS worker and has been off sick for three weeks, but I know I just couldn’t afford to be off. We’re covering her shifts.

“We work as fast as we can with a half-hour, unpaid lunch break, but I’ve had to take a weekend job doing bar work.”

Despite the precariousness of her situation, Jenni has joined colleagues from Blackpool NHS Trust and St Helens and Knowsley NHS Trust to strike against the two-tier system. More than 300 porters, cleaners, reception, security and catering staff have already spent 12 days on the picket line, supported by Unison.

“All these hospital staff want is to be treated fairly,” says Unison general secretary Dave Prentis. “They give their all, knowing they work alongside colleagues paid significantly more. Compass can easily afford to pay a better wage. Not doing so is causing real financial hardship to these hard-working hospital staff, who sometimes head to work ill because, with no sick pay, they can’t afford a day off.”

A Compass spokesman said employees such as Jenni are expected to work unsocial hours according to their roster and that their sick pay policy is in line with that of many other companies. He added that the company had made staff a new offer comprising better pay and conditions. But UNISON said this does not provide parity with NHS colleagues.

“The striking Compass staff have one simple demand – NHS pay rates and NHS working conditions,” says Pat Woolham, UNISON North West regional organiser. “Their sustained strike action has resulted in an increase in the basic hourly pay for workers on some sites, which is welcome and deserved. But they made no commitment to parity.

“Meanwhile, pay for working unsocial hours is nowhere near NHS rates and those with less than one year’s service are still on Statutory Sickness Pay.”

Denise Ward, a domestic in her 50s, has been employed by Compass for four years. “I’ve been off sick, so we’ve been really struggling,” she explains. “We’ve had to ask friends for financial help. If I’d been able to get sick pay, I wouldn’t be going through so much stress or be worried about Christmas.

“I love my job, but it’s obviously not fair we’re doing the same job in the same uniform for different pay.”

Jim Taylor, a dad in his 30s, works in the catering team. “We’re working with people who are vulnerable or with low immunity so having sick people in work is not good,” he says.

“One colleague had to arrange her chemo around her time off so she could carry on earning. No one wants to strike, but we have no choice.”

* Names have been changed to protect strikers’ jobs.