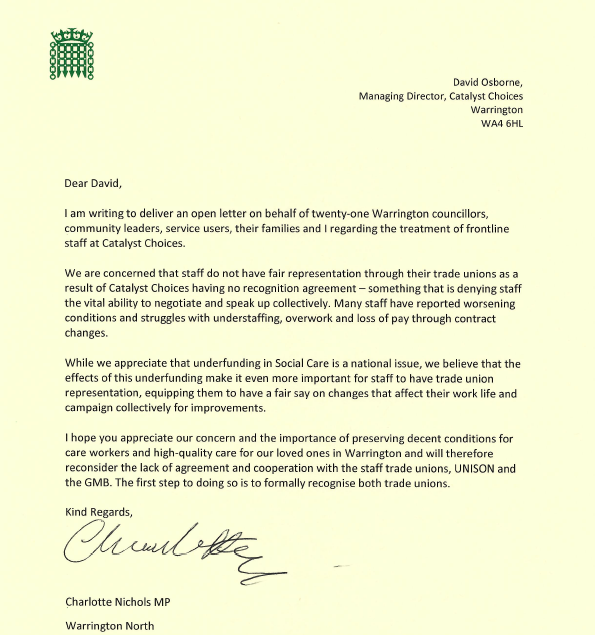 Charlotte Nichols, MP for Warrington North and twenty two Warrington councillors have today (Monday) written to Catalyst Choices, expressing their concern about the local care company’s proposed cuts to its employees’ pay and working conditions. The letter also notes that “frontline staff are struggling with understaffing and unmanageable workloads.”

The letter, which also calls on Catalyst Choices to give its employees a voice at work through recognising trade unions, has been signed by thirty two local politicians, faith leaders and business owners.

Private firm Catalyst Choices – which has been providing care services for Warrington Borough Council since 2015 – is planning to reduce the pay of former council workers who transferred to the company. As part of their transfer, staff were guaranteed the same pay and conditions as council workers.

The predominantly women workforce have fought their employers’ proposed cuts all the way, and delivered their own petition to Catalyst bosses in December. Yet new contracts proposed by Catalyst would include cuts to sick pay, overtime, bank holiday pay and redundancy payments- leaving some staff almost £2000 worse off per year.

Local politicians have now waded into the dispute. Charlotte Nichols, MP for Warrington North said: “This dedicated group of care workers provide top quality care for elderly and vulnerable people in Warrington. They are the hidden heroes of our community.

“If anything, these devoted and knowledgeable care workers deserve a substantial pay rise- the last thing they need is a substantial cut to their pay and conditions.

“I strongly urge Catalyst’s management to reconsider their plans. I believe that a fair solution could be collectively agreed if Catalyst recognised their employees’ trade union. This way, carers themselves could have a say in important decisions such as this one.”

The campaigning care workers have also won the support of those who use Catalyst Choices’ services and their families, as pressure builds on Catalyst to reconsider. Several service users and their family members have signed the letter. Helen Wright, whose father is a resident at a Catalyst care home said: “I don't know what I'd do without the staff at Mosslands. They are all so hard working and incredibly caring.

“We couldn't ask for better care for my dad, who is a resident. They always make him feel safe and well looked after.

“We think it's appalling that Catalyst Choices would even consider cutting their pay. They shouldn't be out of pocket, and we worry that the quality of care might drop if staff have to find other jobs.”

Jackie Hinchcliffe, care worker employed by Catalyst stated: “We are so delighted to get support from so many community leaders in Warrington.

“As care workers, we know how important the work we do is, it's why we stay in the job, despite low pay and anti-social hours. It's easy to feel like no one cares about us or knows what's happening to care workers, and we can feel alone and downtrodden.

“We need to be able to have a fair say, collectively, in our working lives. I'm so glad that people support this basic right, and hope that Catalyst will now respect our request for union recognition."

Twenty two councillors have signed the letter to Catalyst bosses. Warrington Borough Council has previously demonstrated a commitment to ethical social care provision- the local authority’s Adult Social Care Market Position Statement states: “As a Council we are supportive of the UNISON Ethical Care Charter and a fair deal for care staff.”

Councillor Amanda King said: “Catalyst choices should stop playing fast and loose with public money. They are a company who are already failing to recruit new staff, to cut wages now is deeply irresponsible.

“A number of staff live in my ward of Great Sankey South. After speaking with them, I think it is insulting to them and their service users that Catalyst will not even show them the respect of recognising their trade unions. We need to protect high quality care for our loved ones, not put it further at risk.”