Acas talks had been due to take place today (Tuesday). 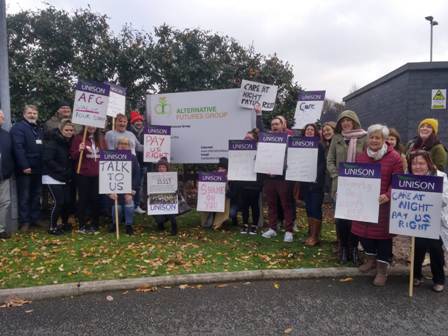 Care support workers employed by Alternative Futures Group (AFG) are in dispute with their employer over cuts to sleep-in top-up payments.  The staff are paid little more than the minimum wage and stand to lose thousands of pounds a year.

AFG have reduced the payments despite there being no cut in the funding they receive from council commissioners for sleep-ins.

So far, the industrial action has involved a 48 hour strike and a seven day ban on sleep-in shifts.

Now, AFG have refused to meet with care support workers and their union UNISON for Acas talks aimed to resolve the dispute.  AFG have set a precondition for the talks that the next round of planned industrial action, due to begin on Friday 5 April, should be withdrawn.

Previous planned Acas talks in February were also abandoned because AFG set a precondition that UNISON should publicly state that AFG do not have the available finances to fund sleep-in top-up payments.

“It is hugely disappointing that for a second time AFG management have sabotaged the possibility of reaching a negotiated settlement to this dispute.

“The whole point of Acas talks is to reach an agreement which would mean staff could go back to work as normal.  In setting a precondition that the strike action is suspended in advance of the talks, AFG management are showing that either they don’t understand the process or they don’t want it to work.

“This is becoming a pattern.  We could have had talks last month but AFG set another ridiculous precondition that UNISON publicly agree with them that they can’t afford to pay the top-up payments.  But we are simply not convinced of that and we would not agree to declare something that is not true.

“We want to talk and we are always happy to negotiate without precondition.  AFG need to come back round the table and attempt to resolve this dispute.  ”