Trust criticised for lack of accountability to the public 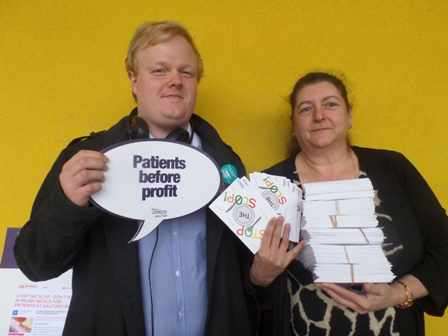 A delegation from the ‘Stop the Slop’ campaign was on-hand outside this week’s Trust Board Meeting at Salford Royal to highlight public opposition to plans to replace freshly-prepared patient food with ready meals and to present Sir David Dalton with the campaign’s petition.  Through signing the online petition and completing postcards, over 2,000 people have expressed concerns about the Trust’s plan to enter into a contract on May 16th with a private company to provide cook-chill or cook-freeze meals.  Amongst the campaign’s supporters are local MP Rebecca Long-Bailey, mayoral candidate Paul Dennett and a number of experts on diet and health.

Campaigners were disappointed that they were not allowed in to the Board meeting to describe the public’s concerns in person.  UNISON, the union that represents staff at Salford Royal, has yet to hear back from Sir David in response to the issues raised in writing last week.

“The Trust needs to take urgent action now to halt this unpopular and damaging plan.  There is widespread opposition to this amongst the public, experts and local representatives.  The Trust have not provided acceptable responses to the concerns raised about the quality and variety of food to be provided, about the cost-effectiveness of their plans and about how they can afford to spend money redeveloping the kitchen as office space when they can’t afford to refurbish it to continue to provide fresh food.

“The senior directors of Salford Royal Foundation Trust make decisions about how to spend many millions of pounds of public money and they are handsomely paid for doing so.  They need to be accountable for their decisions to the public of Salford and Greater Manchester who rely on the hospital.

“UNISON has good working relationships with most NHS trusts and we work in partnership to address difficult issues.  However at Salford, the management of this fiasco so far has involved secrecy about decision-making and no proper response to public concerns.”