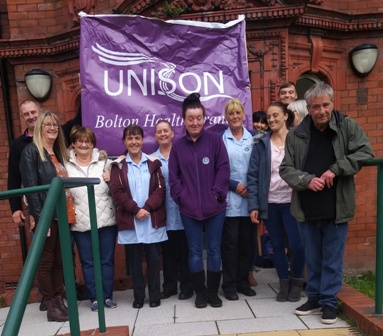 Cleaners, catering staff and porters will be amongst the staff joining a 48-hour strike at Royal Bolton Hospital from 7am on Thursday 11 October.

The strike is taking place due to the failure of local health bosses to pay staff the nationally-agreed pay increase for NHS workers.  While the lowest-paid staff in other hospitals are receiving nearly £2,000 extra this year – a percentage increase of more than 10% - staff in Bolton who do the same jobs are being offered only 2%.

In a ballot of UNISON members, 97% voted to take strike action, with a turnout of 65%.

“Local health bosses are letting hospital workers down.  They are trying to preserve poverty pay rates in Bolton while workers doing the same jobs in other hospitals are rightly getting significant pay rises.

“The wholly-owned subsidiary model is now wholly-discredited.  The treatment of hospital workers in Bolton shows how unfair it is to divide up the NHS team.  All NHS staff should be getting the nationally-agreed pay rise.

“Staff feel that they are being treated unfairly and they are determined to see this through.  Health bosses need to act quickly and ensure that hospital staff get the pay rise that they need and deserve.”