"All NHS workers, be they directly employed or part of a subsidiary company, should be entitled to the same standards, terms and conditions." 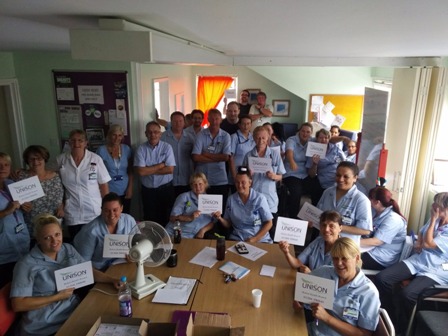 Staff who work at Royal Bolton Hospital including cleaners, catering staff, porters and security officers, are fighting for fair pay.

Staff are not being paid the wage increase agreed recently for NHS staff across the country.

While many hospital workers in Bolton remain on the national living wage of £7.83 an hour, staff doing the same role in neighbouring hospitals are now receiving a minimum pay rate of £8.92 an hour.  Over a year, this adds up to a difference of nearly £2,000.

UNISON is planning to ballot members over industrial action, with strikes possibly taking place from October.

UNISON believes that the Trust and Bolton iFM could potentially access funding from the Government to cover the costs of the pay rise, and is urging them to apply for the money.  Tim Ellis, UNISON Regional Organiser said:

“It should be an embarrassment to Bolton iFM and the Trust that hospital staff are receiving poverty pay.  But so far they have failed even to make an application to the Department of Health and Social Care for Bolton’s share of the money available to fund the pay rise.  They need to take action urgently.”

The UNISON campaign has won support from local MP David Crausby. In an open letter he wrote:

“Our NHS is made up of more than just doctors and nurses.  Without the support of many other workers they would not be able to deliver high levels of care.

“I believe that all NHS workers, be they directly employed or part of a subsidiary company, should be entitled to the same standards, terms and conditions.  That includes the right to a pay rise in line with annual pay awards and access to the NHS Pension Scheme.

“We have one NHS and one workforce.”