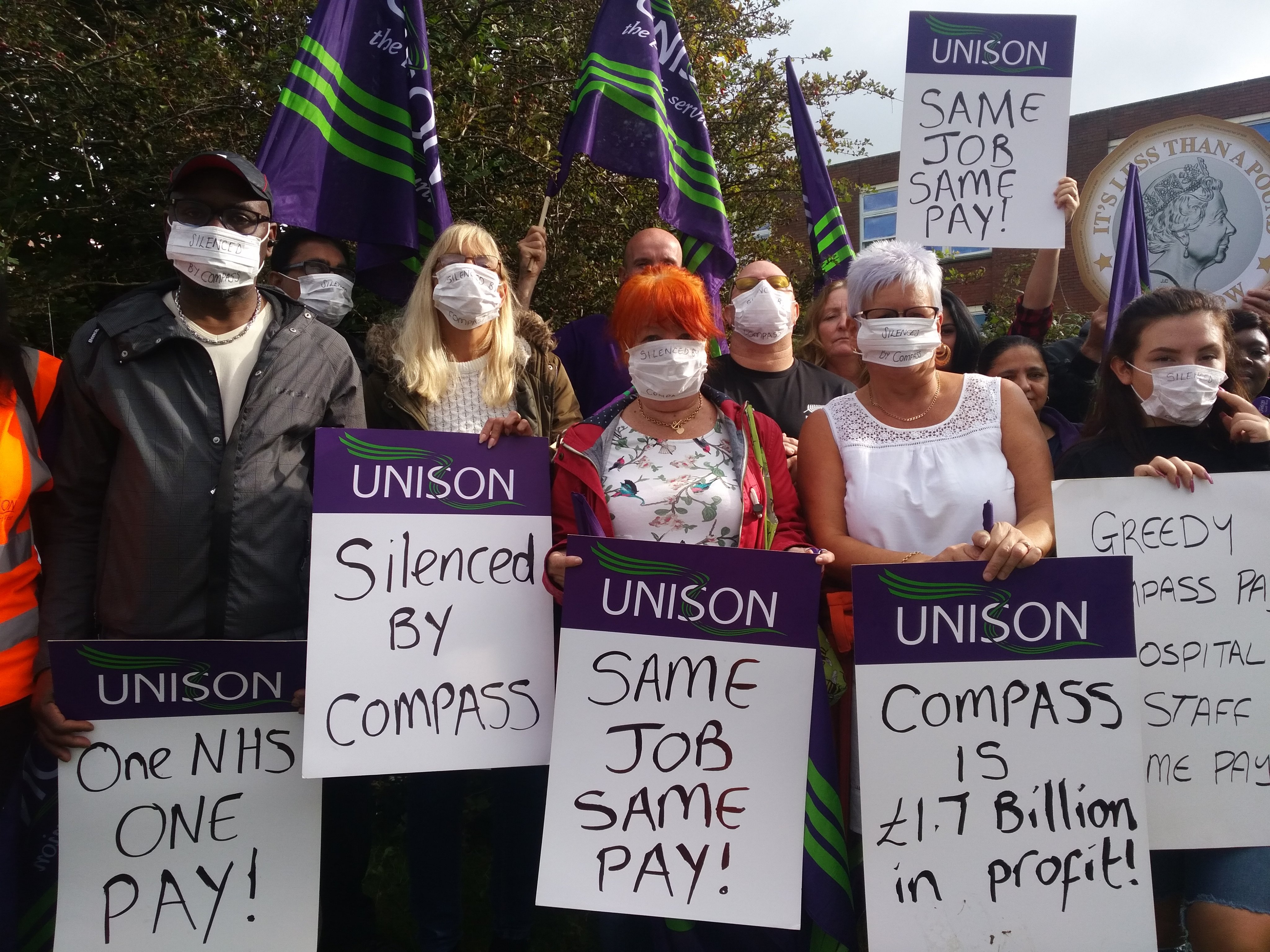 UNISON has condemned Compass for silencing its workers, who are taking strike action for the third time over this issue.

UNISON regional organiser Pat Woolham said: “The way Compass is treating its staff is a disgrace.

“The fact a company that made £1.5bn in profit last year refuses to agree an 82p pay rise for its lowest-paid staff is shocking enough. But to add insult to injury, Compass is now punitively and gratuitously targeting dedicated hospital workers who have spoken out about this grave injustice.

“The multi-national outsourcing giant has opened disciplinary proceedings against several strikers, one of whom is a UNISON representative and another has been nominated to become a union rep. Their crime is simply speaking honestly to the media about their personal finances and experiences of working on minimum wage.

“It’s plain that Compass is aiming to silence the strikers and suppress staff in an attempt to force them back to work. But the strikers are united, determined and will take further action if necessary.

“Employees wouldn’t have needed to speak out if Compass had  listened to them in the first place. The company has made no offer to our members since the two-day strike in August. It’s time for Compass to pay the NHS rate for NHS jobs.”

Gordon Marsden, MP for Blackpool South, has joined the union’s criticism of Compass’ conduct. He said: “Compass are acting completely unfairly and they must strongly reconsider their position.

“When they made over a billion pounds last year in profit, they can definitely afford to give their cleaners a pay rise for doing the same job as those employed by the NHS.

“An 80p rise will not make a massive difference to the company, but it will to their staff, who may have other family members to also support.

“The pay gap is also not good for morale at the Vic when staff are overstretched and struggling as it is. This dispute simply once again highlights the unfair difference between privatised and outsourced staff, compared to those employed in the NHS.

“I will advocate for them loudly and publicly. It’s time for Compass to drop the bullying tactics and engage with its staff through UNISON to end this dispute.”

Most of the 300 hospital workers affected are paid only the minimum wage rate of £8.21 an hour, yet work alongside colleagues who are employed directly by the NHS, where the lowest rate is £9.03 an hour. This difference of 82p an hour is worth £1,500 a year for full-time staff, the union says.

On top of the lower hourly rate of pay, Compass staff are further disadvantaged by receiving no shift bonuses for working weekends and bank holidays. In addition, they receive only statutory sick pay, whereas their NHS colleagues are able to access a comprehensive sick pay scheme.

The Blackpool hospital cleaners, held a rally to highlight their situation on Thursday at the Marton Institute in Blackpool. The cleaners, caterers, porters, receptionists and security workers in St Helens began their three day strike on Friday with loud and vibrant picket lines.

This is the third round of action on the issue by these hospital workers, following a one-day strike on 31 July and a two-day strike on 27 and 28 August. A further planned strike at Liverpool Heart and Chest Hospital NHS Foundation Trust was called off on the eve of the first strike after the trust – rather than the company – agreed to fund the pay parity with NHS colleagues.