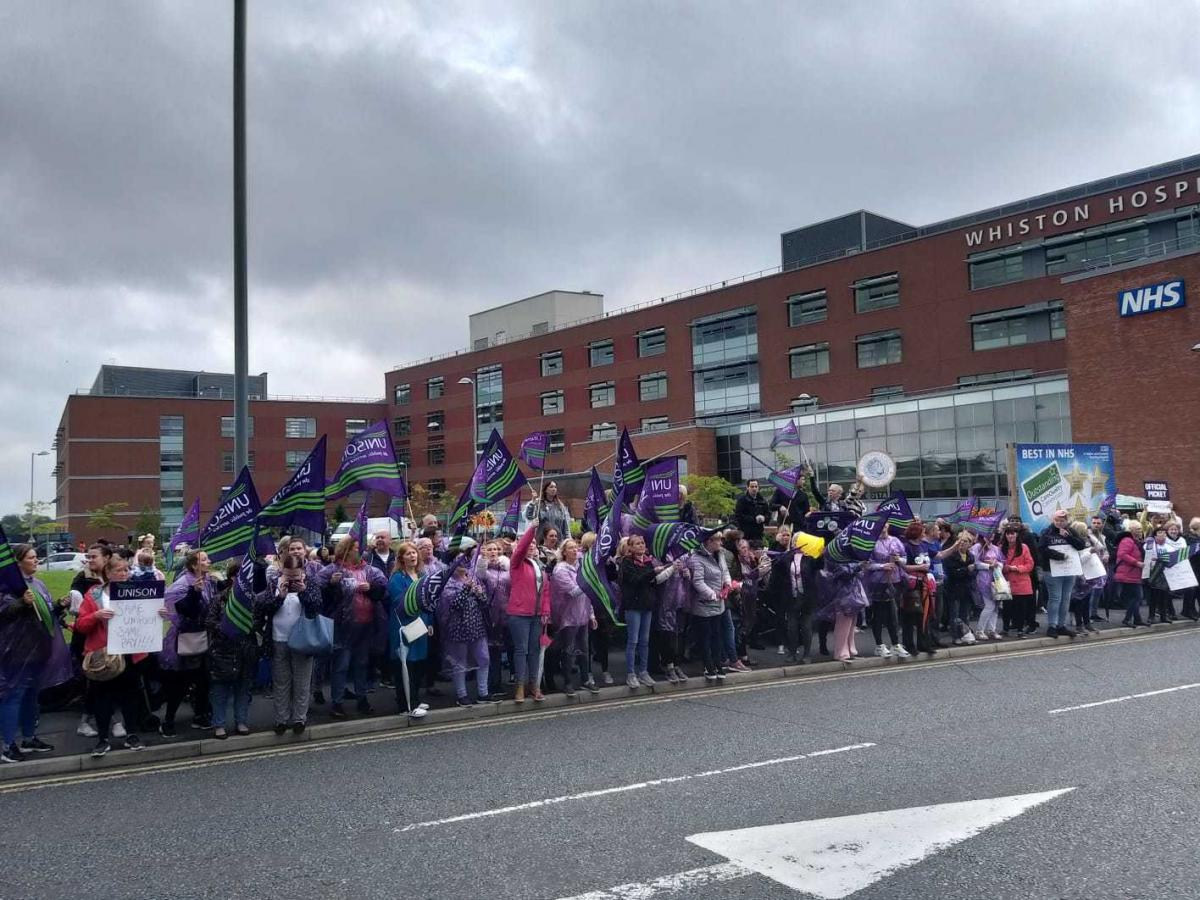 Around 300 staff employed by private contractor Compass within NHS trusts in St Helens and Blackpool have announced a further six days of strike action beginning on 14 October. It is the latest round of action taken by the hospital workers over the company’s failure to match health service pay rates and working conditions.

Most of the hospital cleaners, caterers, porters, receptionists and security workers affected are paid only the minimum wage rate of £8.21 an hour, yet work alongside colleagues who are employed directly by the NHS, where the lowest rate is £9.03 an hour. This difference of 82p an hour is worth around £1,500 a year for full-time staff.

On top of the lower hourly rate of pay, Compass staff are further disadvantaged by receiving no shift bonuses for working weekends and bank holidays. In addition, they receive only statutory sick pay, whereas their NHS colleagues are able to access a comprehensive sick pay scheme.

UNISON has condemned Compass for making no genuine attempts to resolve the dispute, which has rumbled on since July. Hospital cleaners in Blackpool have not received a single offer from the company, which made more than £1.5bn in profit last year, despite already having taken six days of strike action during this dispute.

UNISON regional organiser Pat Woolham said: “Hospital staff have asked their employer for one thing – fairness. Compass workers can’t reasonably be expected to give their all while working alongside colleagues who are being paid more than them.

“Compass has silenced its staff by targeting dedicated hospital workers who spoke out about the grave injustice that has driven them to take strike action.

“Then the multi-national company sent coach-loads of staff from around the country to cover the shifts of striking workers, paying through the nose to put them up in hotels.

“Now the latest Compass strategy is to ignore the concerns of its staff by refusing to negotiate over this issue.

“UNISON has approached Acas (the Advisory, Conciliation and Arbitration Service) in an honest attempt to get back around the table and find a way forward. It is immensely disappointing to learn that Compass is giving Acas the runaround and refusing to engage in talks.

“The company can easily afford to fund this 82p pay rise immediately. Unfortunately they have chosen to go to war over this issue. It is clear that poverty pay is a matter of principle for a company which is worth £32bn.

“The next six days of strike action will take place on alternate days, which will cause the catering behemoth a headache. Political and community support for the strike is growing. The hospital staff are standing firm in their pursuit of justice. It’s time for Compass to pay the NHS rate for NHS jobs or leave our health service for good.”

This is the fourth round of action on the issue by these hospital workers, following a one-day strike on 31 July, a two-day strike which began on 27 August and a three-day strike which began on 19 September. A further planned strike at Liverpool Heart and Chest Hospital NHS Foundation Trust was called off on the eve of the action after the trust – rather than the company – agreed to fund the pay parity with NHS colleagues.