Following on from the work done with apprentices at Bury Council which was featured in a Unionlearn report for Government, UNISON ULR lead Roger Pakeman and Unionlearn Apprentice Lead Mark Rowe met with Bury Council apprentices to offer a skills check. 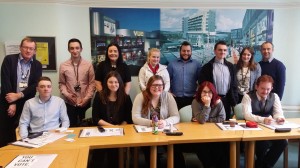 This was a follow up visit from the last skills check event in September. Using the Value My Skills cards and a new piece of Wordwall software and with their Council Apprentice Lead Lucy Morris there to offer support and help, the apprentices were all able to talk about their current role, what they feel they need to progress and where they would like to go in the future. They were then taken through the wealth of courses that UNISON has to offer, soon to be provided in association with the council.

“It is really good that we talk about apprentices and how we offer them a worthwhile apprenticeship which ends in a role. I have been able to look at the way we do things and compare it with what’s happening in other areas, plus we’ve discussed Traineeships and mentoring training for trainers. And the buffet wasn’t bad either!”