UNISON North West response to the selection of Andy Burnham as the Labour Party candidate for Mayor of Greater Manchester. 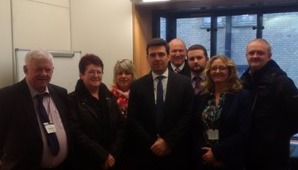 “Andy is undoubtedly an excellent candidate for Mayor of Greater Manchester and we will be whole-heartedly supporting his election campaign.

“It is great for Greater Manchester that the mayoral role has attracted a candidate of Andy’s calibre and experience.

“UNISON has a long-standing positive working relationship with Andy Burnham.  When he held the Health and Home Office portfolios for Labour, Andy was always keen to hear about, and learn from, the experiences  of our members delivering services in the NHS and Police Service.  UNISON will work with Andy as Mayor to ensure that the voices of public service workers across Greater Manchester are heard.

“Tony Lloyd, as Interim Mayor, has put in place strong foundations to make devolution a success.  I’d like to pay tribute to Tony for his tireless work and dedication for the people of Greater Manchester over many years.

“We’re looking forward to continuing our close working relationship with Andy as we support his campaign to become the city-region’s first elected mayor.”