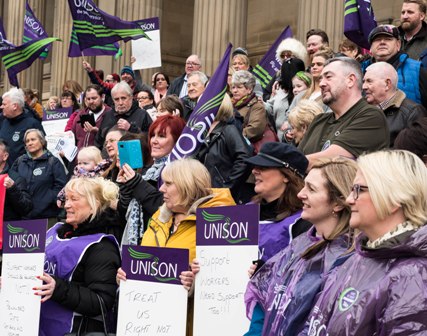 Over 650 UNISON members employed by the Alternative Futures Group (AFG) begin seven days of strike action on Tuesday (7th) over cuts to their income.

AFG have cut back care support workers’ pay for sleep-in shifts.  This will cost some staff as much as £2,000 per year.  The care support workers are only paid at the level of the minimum wage for their regular hours and many are now struggling to stay in the care sector due to not being paid adequately at night.

UNISON has offered to meet with AFG for negotiations aimed at averting the strike, but AFG has so far chosen to reject this route.

Staff have received great support for their strike action, with a public petition amassing more than 13,000 signatures.

“AFG staff and council commissioners are furious that AFG senior managers have refused to negotiate to resolve the dispute.

“AFG’s pay cuts are jeopardising the future provision of care services for vulnerable people, as experienced and skilled care staff are being driven out of the sector.  AFG’s senior management have been entrusted with providing a very important public service, but their actions are both unjust and reckless.

“AFG need to get back round the table and enter into serious talks to get this matter resolved.”

“It is a struggle to get by on the minimum wage and we can’t afford a cut to my income.  I love working with the service users but I’m having to consider leaving because we can’t pay the bills.

“We want AFG to listen and to pay us fairly for sleep-ins.  We need this matter to be sorted out now.”

A public rally takes place on Friday 10 May at 12noon at St George’s Hall steps in Liverpool.  The rally will be addressed by UNISON’s General Secretary Dave Prentis, striking care workers, local MPs and Paula Barker.