100% Vote for Strike Action Over Unfair Treatment of Ambulance Staff

Phenomenal ballot result shows the strength of feeling amongst staff. 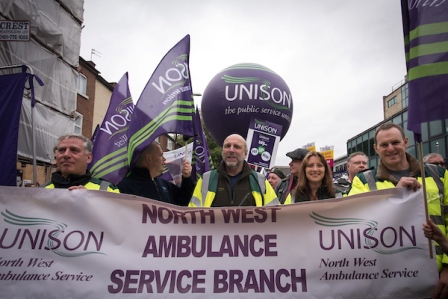 Staff are prepared to go on strike to end the injustice of having lower pay and worse terms and conditions than their colleagues who do the same job – some of whom started in the role after them.

The staff are employees of the North West Ambulance Service (NWAS) NHS Trust.  The inequality in treatment arose because the service was outsourced to Arriva between 2013 and 2016.  Arriva employed staff on inferior pay and conditions, and these have remained in place even after staff transferred back into the NHS more than 18 months ago.

Staff who were recruited while Arriva held the contract receive up to £2.40 an hour less pay, fewer breaks and less sick pay than their colleagues.

“This is a phenomenal ballot result and shows the strength of feeling amongst staff.  Health workers do not take the decision to go on strike lightly, and this vote reflects how unfair the current arrangement is.  Staff will not accept it anymore.

“This injustice has been allowed to go on for too long.  It is not too late for a strike to be averted but NWAS management need to act now to resolve this issue once and for all.”